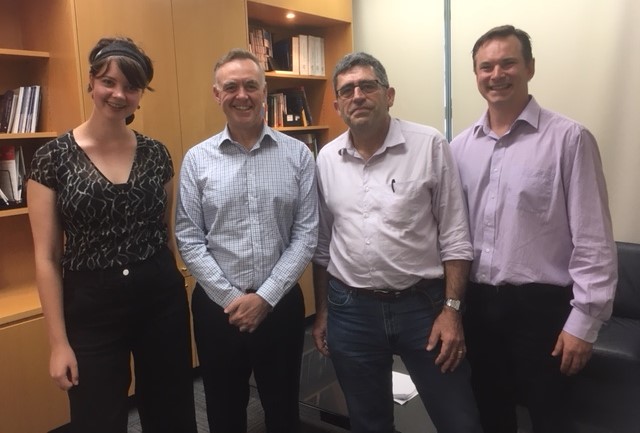 Eden, Kenn and I met with Senator Chris Ketter. He began by talking about the tragedy of 1200 people having drowned at sea and not wanting the ALP to do anything that would encourage people smuggling again. Senator Ketter by his own admission had given little attention to policy around those seeking asylum.

For example, he was unaware of ALP policy that all those on Temporary Protection Visas and Safe Haven Enterprise Visas should be transferred to Permanent Protect Visas, but has no objection to it. He was unaware of the appeals process or ALP policy of reinstating the Refugee Review Tribunal. Senator Ketter was most attentive when informed of the coalition of 90+ organisations led by World Vision, campaigning for the removal from Nauru of all children by World Children’s Day on 20 November.

Senator Ketter throughout the meeting discussed good news stories of refugees establishing themselves in regional centres.  He is interested in promoting these positive stories to encourage the welcoming of refugees, and possibly make it a condition of obtaining a visa that people agree to move to a regional or rural centre. Chris responded positively when we noted his support for the family removed from Biloela, and we spoke about that situation.  I informed Chris that in escaping Iran my friends did not set out to reach Australia. We walked him through their journey to Christmas Island, Nauru and the mental health problems they have suffered. We seem to overturn the idea that Senator Ketter that everyone is fleeing with the goal from the outset to reach Australia.

Thank you for the meeting, Senator Ketter, we appreciate the opportunity to discuss Australia’s current policy for people seeking asylum.