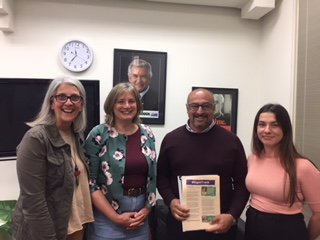 This meeting was organised by Emma Ryan

Representatives from Northsiders with Refugees and Wills with Refugees recently met with Peter Khalil MP for Wills to discuss the #RightTrack Conversations in Victoria Report,  detailing the overwhelming community support for fair and decent asylum policies in his electorate.

Representatives reported huge concerns raised in conversations about people stranded in offshore camps. Peter advised that if Labor wins government, people would be resettled as a priority and the camps emptied. While the group was encouraged, they reinforced the community's expectation that Labor act now. Peter tried to get time in Parliament the following week to call on the government to medically evacuate all children and their families from Nauru as a matter of urgency.

True to his word, Peter did announce proposed legislation which would restore decision making powers for medical evacuations back to medical professionals and not bureaucrats. While this fell short of the group's request it does indicate some level of good will to act on this issue.

The group will hand over their final report in early 2019.

Thanks for a productive meeting Peter!